English
The Press Project
The danger to see the first victim of hunger strike in Europe on 21th century is ante portas. 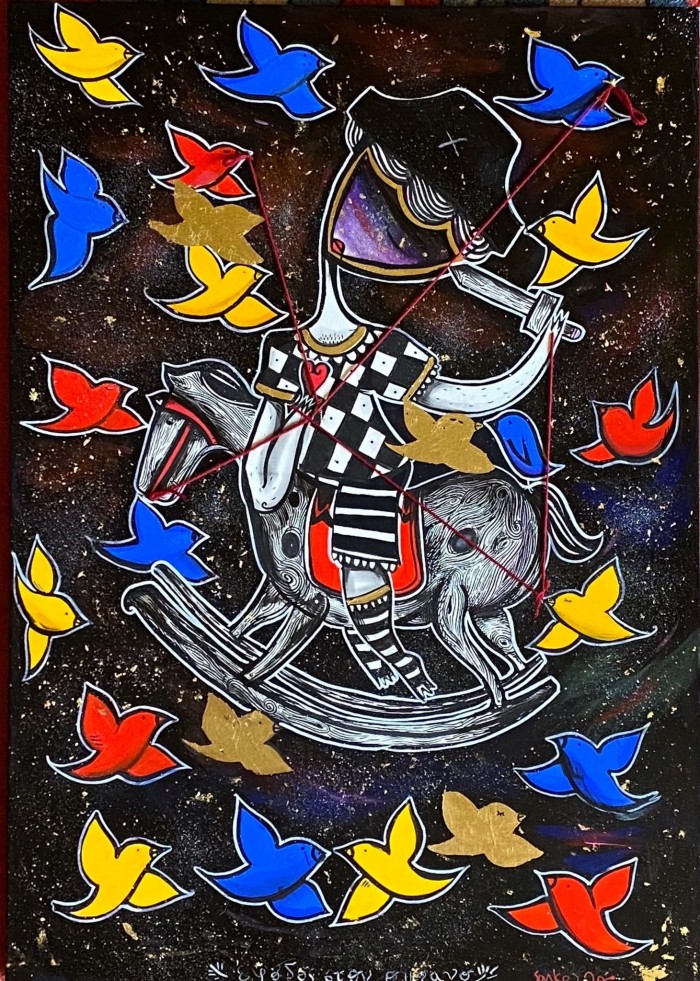 Dimitris Koufodinas is serving 11 times life sentence plus 25 years after he was convicted as a member of the Revolutionary Organization November 17th (17N). The 17N was active in Greece since 1975 and until 2002, when it has been dismantled by the Greek authorities in collaboration with US and British officers. It has been the one between others organisations that have been born during the Greek dictatorship and after its collapse. The dictatorship has been supported by the USA in all possible ways.

The first appearance of 17N was in 1975, in this context, with the shooting of the CIA chief for Southeast Europe. Since then, breaking up the 17N has been a fundamental US demand, with great pressure on all Greek governments. In 1989, a Greek politician and journalist, Pavlos Bakogiannis, fell victim of the organization. He was brother-in-law of the current Prime Minister, husband of his sister, Dora Bakogianni ex Ministry of foreign Affairs, and father of the present-day Mayor of Athens.

Dimitris Koufodinas surrendered in 2002, during the 17N dismantle researches. He declared that he was a member of the organization and he assumed political responsibility for its actions. He did not defend himself nor did he testify against any of his co-defendants. But during the Court audiences he referred to the moving causes of the 17N actions and because of this, he has been convicted for the most of them. This stance of him was appreciated by a notable part of people in the Greek society, even being very hostile to the lethal activity of the organisation.

Since 2002, Dimitris Koufodinas was permanently detained in a special underground wing of Korydallos Prison (in Athens), constructed after the dismantle, specially for the members of the 17N.

According the law, the prisoners after their conviction, are entitled to rights and equal treatment, which cannot be depended from the kind of crime they have been convicted for.

But Dimitris Koufodinas had not been allowed to have equal treatment even thought, during all the 18 years of serving his penalty he has been an ideal prisoner, respecting the prisons rules, and he has been respected by the other inmates, the staff and the Prison’s administration, wherever he has been detained. He has spent the time in prison reading, studying, writing articles, also wrote two books, translating political books about the Latin America movements and others.

In 2014, the government of New Democracy, has transformed the prisons of Domokos, in a small town in the mountain in the centre of Greece, to prisons of high security for the detention of criminals to be considered dangerous. This law which introduced this kind of prison had been criticised by all the legal community. A few days before the elections which brought the leftist party in the power, D. Koufodinas has been transferred to these prisons without any motivation, as he had never bothered the prison during all the time of his imprisonment. The new conservative government cancelled the law and D. Koufodinas returned to Korydallos Prison.

Although he had been entitled to temporary prison leave since 2010, he has been given the first in 2017 and thereafter he has been granted the leave five times more. And it is interesting to mention that even the Prisons Staff Federation had issued twice press releases on his support. But also a notable number of intellectuals have supported his right to leave permission. Among them, the hero of the resistance to German occupation, Manolis Glezos and the President of the Greek Union of Judges and Prosecutors, Ch. Sevastidis.

In 2018, after 16 years in the special wing of Korydallos, he was transferred to the Volos rural detention facility, been provided by the law, for prisoners who have respected the prison’s rules and where the detention conditions are better.

However, the granting of temporary prison leave for D. Koufodinas was intensely and systematically opposed by a part of the TV and mass media, but also by politicians who spoke out and intervened against these decisions, with public statements and interventions, and asked to end the granting of furlough from jail. Among them were the current Prime Minister and the members of his family. There were also loud interventions from the American embassy against him.

As a result of this polemic, since the spring of 2019 onwards, temporary prison leave was denied on grounds related to Koufodinas political beliefs and his refusal to express repentance – something that is not required for the enjoyment of convict’s rights under Greek law. The matter of Koufodinas leave permission reached the Supreme Court (Arios Pagos), which ruled that the rejection of his relevant applications was unfounded and not legally reasoned, and sent again the case to the local Court to decide. However, the Volos Court responsible for granting temporary prison leave did not change its mind and definitively refused to recognise his right to leave from prison. A few days later, prevailed in the elections Prime Minister Kyriakos Mitsotakis and his party and the current government came to the power, as it was obvious, the last months, before the elections.

The president of the now ruling New Democracy Party, Kyriakos Mitsotakis had publicly promised that, when he will come in to power, he will exclude this particular prisoner from leave permission and from the rural prisons. Indeed, in December 2020, Law 4760/2020 was voted and enacted in a hurry by the Parliament majority of N.D. on which, a special, photographic provision provided that the convicts for “terrorist” crimes are excluded from custody leave and from their detention in rural prisons, putting in force the previous promise of the Prime Minister.

At that time (and until today) the only convict of this category, who was in a rural prison, was D. Koufodinas. During the legislative debate in Parliament, D. Koufodinas was personally named as the addressee of this law.

On December 23, 2020, D. Koufodinas was suddenly transferred from the rural facilities to Domokos prison, in the manner of a kidnapping. His place of residence in the rural facility has been given in photos, taken illegally, to the media, in order to support rhetoric against him about privileges. (The place was as all rural prisons in Greece).

In Domokos, he is locked together with two other prisoners in a suffocating small cell, in which, he is pent up for 15 hours a day, without having any space, nor time to do any of his previous activities, an enduring the smoking and the other needs of his fellow inmates.

Dimitris Koufodinas, now 63 years old, is experiencing a dramatic deterioration in his detention conditions, with catastrophic consequences for his personality, mental and physical health.

But the transfer in Domokos was completely illegal as it violated even the recent law provisions, having been enacted for this particular prisoner personally, as according these provisions, he should have been returned to Korydallos, the prison where he had been held for the previous 16 years, closer to his family, even if worse than the others.

Consequently a war has been launched against D. Koufodinas.

The responsible Ministry of Citizen Protection General Secretary, replying to the lawyers request, denied to give the copy of the decisions concerned, necessary to question the legitimacy of the procedure and the reasoning.

The same stated in an official reply that law has been fully applied and the prisoner had been transferred to Korydallos firstly and subsequently to Domokos prison. This was completely a lie. The G.Secretary of the Ministry was lying in official documents.

She stated also publicly that Koufodinas cannot have any hope to get out of prison. But according the law he has a right to apply for house arrest in this stage, (a possibility he did not want to use) and for conditional release after 10 months. According the law an application of that kind cannot be rejected by the court but only on grounds of his behaviour during his imprisonment, and this has been always ideal.

The G. Secretary has given also, different reasoning for this transfer to Domokos, all unfounded and false: fight against terrorist at the beginning, public order next, COVID-19 measures consequently, and finally the Ministry produced a –non existing before– penal prosecution, (concerning a signature of the man in a solidarity common text of prisoners, 3 years ago) as the reason of the transfer.

These all has produced an intervention of the Greek Ombudsman, putting questions to the ministry, which have not been answered until now.

The general context suggests that the transfer of D. Koufodinas was made out of revenge and under pressure from the US Embassy. Members of the current administration had previously announced and committed to worsen the conditions of this particular prisoner. The violations of the law, even of the one legislated merely to worsen the terms of Koufodinas’ sentence serving, are an unprecedented case of arbitrary interference in the judicial system for reasons of personal vengeance, of an arbitrary interference such as that required by a politically powerful family.

Moreover from what declared by personalities with high public offices, even the family of the prime Minister now, and from the same Prime minister before his election it seems that they intend to intervene even into the area of Justice System, in order to exclude D. Koufodinas from rights which are assigned to any other prisoner.

After the deliberately inaccurate confirmation of the Ministry, Dimitris Koufodinas decided to protest against all these conspiracy methods against him and he announced a hunger strike, with the demand to be transferred back to Korydallos, as provided for, in the latest law, having been enacted especially for him. He has started on 8/1/2021 and he continues. He was accepting only water, without anything else, till three days ago, on the 47th day, when he decided to refuse water too. He is now in an Emergency Unit, in a local hospital, in his 50th day of hunger strike.

The current demand is for Dimitris Koufodinas to be transferred to Korydallos prison as well as to end the arbitrary interventions – legal and factual – against him, and his systematically discriminatory treatment.

The Ministry does not want to recede. The hunger striker the same. The mass media especially the TV channels, the most of them very close to the government are engaged to a war of moral disrepute against the prisoner. From the other hand a plenty of signatures have been given in support of the man, by intellectuals, lawyers, jurists, university professors, organisations and parties supporting the demand and asking the law to be applied for him. Many between them have been morally attacked and threatened for their signature.

There is not yet a prosecutor’s order for compulsory feeding, and it is sure that nobody for the moment dares to do something like this, as it is considered to be a torture. A medical intervention can be only in the moment he will be in a situation of loss of senses. We are just steps away from there.

There is a not rare believe, that such an inacceptable development would be well accepted by whom is leading the war against him.

The danger to see the first victim of hunger strike in Europe on 21th century is ante portas.