Game of Elections: A Song of Seats and Ballots

EnglishΠολιτική
While the simple folk struggle, their lords and rulers engage in conspiracies, backstabbings and violence. There are a number of parallels between modern day Greek politics and the fictional universe of Game of Thrones. Now one blogger has imagined what would happen if these two worlds were to collide.
The Press Project
The Press Project
|

The inhabitants of Westeros may have little understanding of democracy, adhering instead to a mixture of hereditary rule and bloody combat to choose their kings. But in the fictional land imagined by author George R.R. Martin there is plenty of political maneuvering amid the dragons and ice-zombies. Occasionally members of the ruling class even pause their machinations long enough to spare a thought for the good of realm and its people. A bit like Greek politics, in other words.

So it is entertaining to imagine how some of the characters would campaign were Greek/European-style elections to be transposed to the Seven Kingdoms. That’s exactly what the blogger Akratos did on his blog. With permission we post his inspired campaign posters here with some of our own explainer notes. Who will sit on the [parliamentary committee]?

[Warning! The post below contains some spoilers up to and including season 3 of the HBO series] 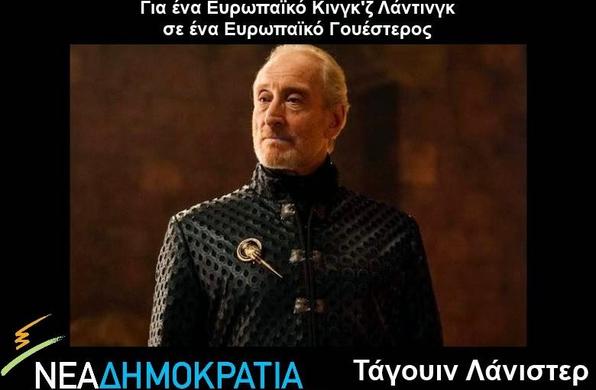 The Lannisters are wealthy, pro-market and ‘always pay their debts’ (i.e. pro-memorandum). They are also ruthless and accustomed to power and the status quo. As leader of the house, Tywinn is a stern authoritarian who knows what is best for the people, even if they don’t, and will do whatever it takes to bend all to his will. New Democracy would be a natural fit for him. 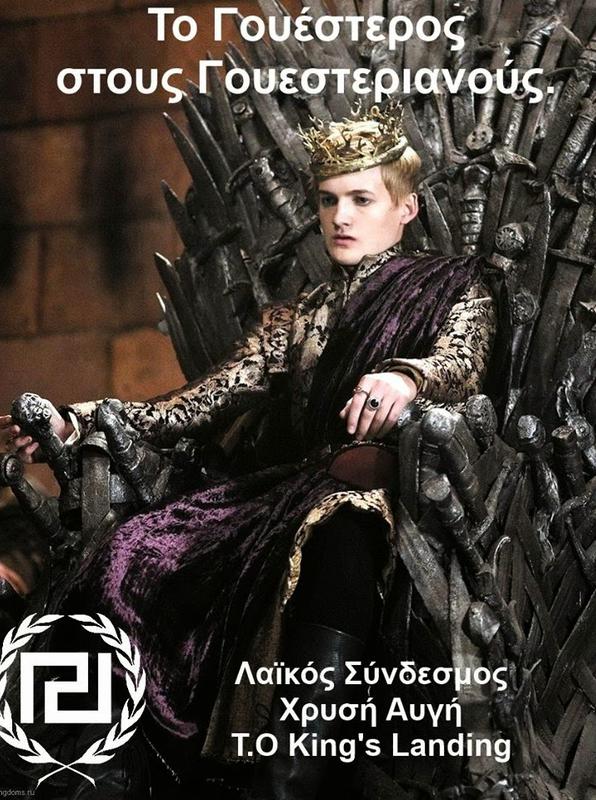 While King Joffrey may be a Lannister by blood he goes beyond ruthlessness to sheer cruelty. Violence to him need not have any ultimate purpose, it is an end in and of itself, to be inflicted out of the sheer joy of it. As a ruler he seeks to impose his will through fear alone, terrorising all those he considers beneath him. Which is pretty much everybody. His philosophy is expressed by his mother early on in the series, “Anyone who is not us is our enemy.” The brutal little tyrant would make a perfect Golden Dawn candidate. 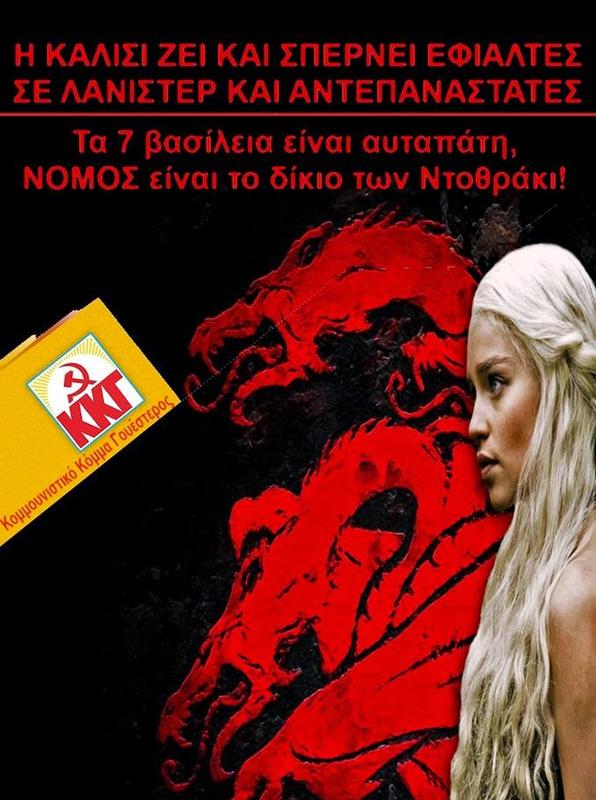 Party: The Communist Party of Westeros (KKW)
Slogan: The Khaleesi spreads nightmares, to the Lannisters and counter-revolutionaries

Daenerys Targaryen gave the lowliest serfs and slaves freedom and they chose to march lock-step behind her into battle. She aims to depose the king, and to radically redistribute the wealth and power of Westeros, taking it from the old families and giving it to her proletariat over whom she will rule with total authority. If her sigil wasn’t a dragon, it would be a hammer and sickle.

And the people’s movement that supports her: 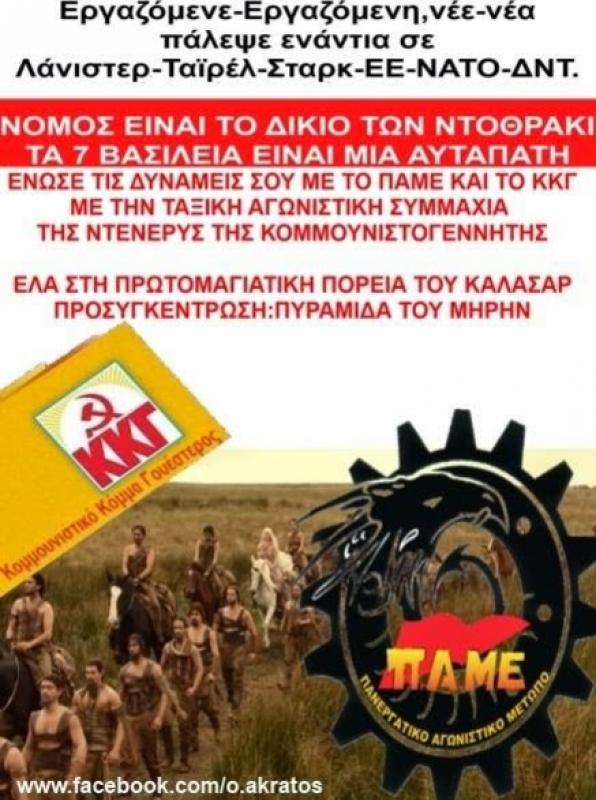 Translation: Worker, youth, fight against the Lannister-Tyrell-Starks-EU-NATO-IMF
Dothraki law is all that stands, the seven kingdoms are a sham

Come to the May Day march of the Khalasar. Meeting point: the pyramid of Meereen 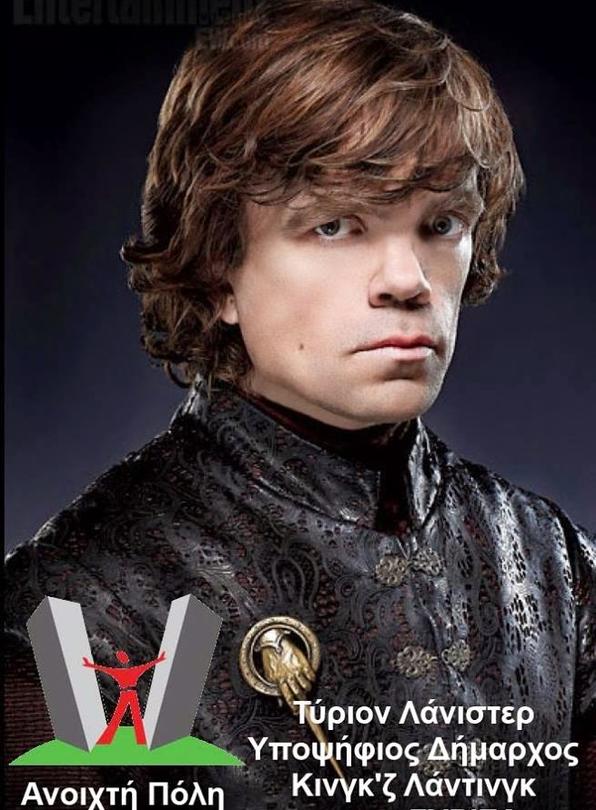 Tyrion’s diminutive stature means that he is disenfranchised from the traditional establishment despite his noble birth. A natural disabled rights campaigner, he is also highly self-involved but less ambitious than the other Lannisters. SYRIZA would make a good fit for him as he seeks the mayorship of Westeros. 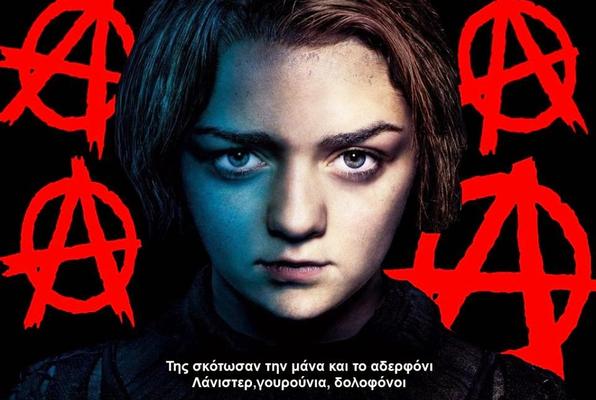 Party: No party, just Anarchy
Slogan: They killed her mother and her brother: Lannisters, pigs, murderers

Arya doesn’t know who should rule the seven kingdoms, what economics reforms should be implemented or how the realm should handle foreign policy. And she doesn’t care. She is on a mission to seek revenge for the state-sponsored violence that killed her family. The institutions that are inherently cruel and brutal must be torn down. Anarchy. 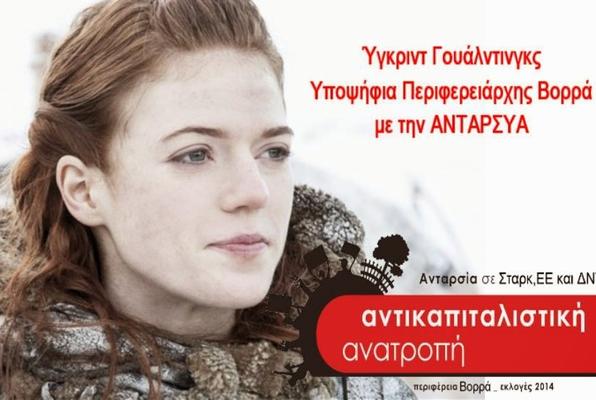 (Ygritte Wilding, candidate for Regional Governor of The North)

Party: ANTARSIA (The Anticapitalist Left)
Slogan: The Wildlings are not media presences, the snows give birth to consciences

The Wildlings refer to themselves as the ‘Free Folk’, and opt for a more egalitarian system than the feudal society of the rest of Westeros. They would rather die than kneel before any lord and accept the social stratification, land ownership and economic system of Westeros. ANTARSIA it is. Stannis Baratheon was once on top of the world, the brother of the King and true heir to the throne. But things have not gone too well for him. Missteps and arrogance led to a devastating defeat that have left him bitter and in an existential crisis. If it wasn’t fantasy, it would be PASOK. Offspring of a significant family, coming into her own, marries the king. When the -SPOILERS – king dies, all bets are off.

And finally, because we noticed the absence of the Independent Greeks in the list, the creatie department of TPPi took it upon itself to correct this oversight: 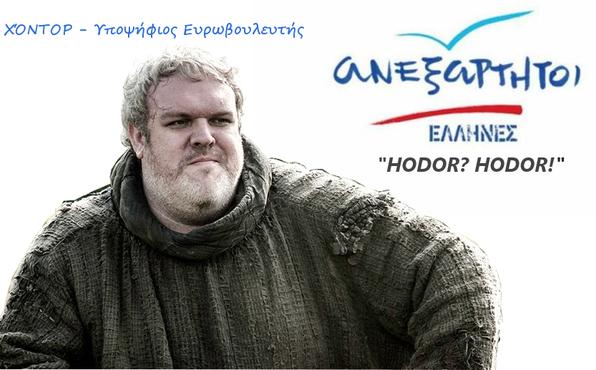