EnglishΕλλάδα
The Press Project
Eu2014.gr, the domain name that was expected to give information on Greece’s presidency, is taken by a blogger who instead questions whether 2014 will be the year the country leaves the eurozone.
The Press Project
|

Once again Greece is to be the odd man out of Europe, this time over IT problems.

As the EU presidency rotates from country to country so does its website. In order to keep things simple a convention has been followed since 2001 where the web address of the presidency consists of ‘eu,’ followed by the year, followed by the domain extension of the country holding the position. So for information about Lithuania’s current EU’s presidency one should go to eu2013.lt.

However visitors to eu2014.gr seeking the official website of Greece’s upcoming presidency will be surprised to find in its place a blog that loudly poses the question ‘Will Greece still be in Europe in 2014?” and who’s stated goal is to, “highlight all the decisions taken by Greek politicians that lead the country out of the Union, economically, politically, culturally. And the story of the unsuccessful effort of Europe to stabilize its Balkan member.” 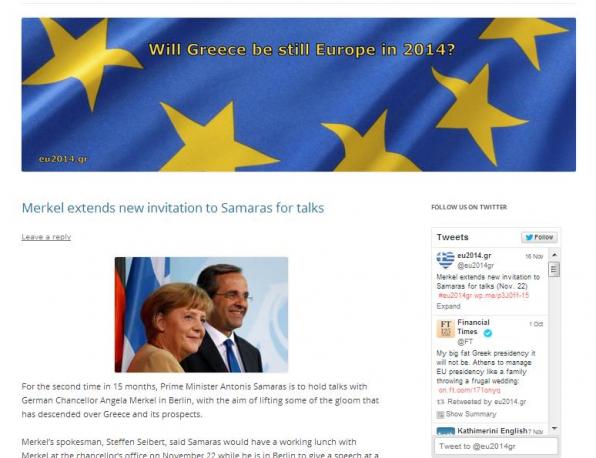 The enterprising blogger registered the domain name at least several months ago and appears to have rebuffed requests by embarassed Greek officials to give up the name. With few other options Greek officials have instead launched the provisionary website for Greece’s presidency at gr2014.eu.

That, however, was not enough to stop some Twitter users from picking up on the squatter’s blog: