EnglishΕλλάδα
Guy Verhofstadt, candidate for EU Commission president, sits on the board of a multinational looking to gain from the privatization of water utilities in Greece. It is widely known that many of Greece’s problems with corruption stem from the cosy relationships between politicians and business interests. Yet that some of the EU candidates have similar ties with powerful lobby groups or industries appears to be of little concern.
Nikolas Leontopoulos
Nikolas Leontopoulos| | |

In the recent televised debate for the Presidency of the European Commission, Ska Keller, the candidate for the European Greens, attacked the lobbyist system that has prevailed in Europe. “It’s the lobbyists who spend millions in influencing lawmakers like many of ourselves,” she said – adding an accent on ‘ourselves’ and a wry smile that could be interpreted as an innuendo for some of the other candidates present. “That needs to stop. And that is a big problem of the EU. We have to hear the voice of the people not the voice of the lobbyists.”

But for Guy Verhofstadt, the candidate for the Liberals, this is not the biggest problem. He said: “You cannot forbid that there are lobbyists, the problem is that from time to time, like we have seen the case in this Commission, there is corruption coming from that. That is the problem. And that we have certainly to fight against, and to make new rules; and we have made new rules in the last parliament to strengthen the fight against corruption, against the lobbyists… It is about who is the guy or the woman representing you and what are the ethics of these politicians…”

So who is the Guy representing you?

Besides being an MEP, a candidate for President of the EU Commission and a former Prime Minister of Belgium, Mr. Verhofstadt sits on the board of Sofina (Société Financière de Transports et d'Entreprises Industrielles), a Belgian holding company headquartered in Brussels.

Laying out his vision for Europe, Mr. Verhofstadt said, “What we want to do is to start a new wave of integration in the European Union. In the key markets we have today, capital markets, bank, digital, telecoms, energy, that is what we need, using the scale of the European Union to make a leap forward in the integration and having a new growth.”

Sofina, according to Wikipedia, invests in multiple economic sectors such as telecommunication (7%), portfolio companies, banking and insurance (6%), private equity (6%), company services (18%), consumer goods (31%), energy (6%), distribution (8%) and various other sectors (10%). Mr Verhofstadt is also a board member at Exmar, a shipping group serving the international gas and oil industry.

In other words, the sectors in which Verhofstadt wants more European investment (with public money of course) are the exact same ones that the investment fund he is part of is already investing in…

Guy Verhofstadt, GDF Suez and the privatization of Greek water

But there’s more to it. Sofina, according to its own statements, has a stake in the energy multinational, GDF Suez. Indeed its impact is so important that the fund has a seat on the board of Suez. Now, the plot thickens: Suez’s full subsidiary, Suez Environnement (in which Sofina also holds a stake) is participating in one of the two consortia that in Greece have reached the final phase of the privatization of EYATH, the state-owned company that manages the water services for Thessaloniki, the second biggest Greek city.

In its bid for the Greek water company, Suez is not alone. It is complemented by Aktor, one of the most powerful business groups in Greece, with a leading role in construction, highway concessions, waste management and… now water. Aktor is controlled by a Greek family with a pivotal role in the so called ‘triangle of power’, a nexus of media, business and politics in Greece. By most forecasts the Suez – Aktor consortium is considered the favorite to win the bid.

In Greece’s 'rotten' politics we have a word for the conflict of interests that plagues the political world: ‘diaploki’, which literally means intertwined interests. How far from this definition does Mr Verhofstadt’s paradigm stand?

The paradox of the Greek water privatization is that on paper everybody seems to be against it. This past Sunday, more than 200,000 citizens in Thessaloniki voted in an unofficial referendum against the water privatization by an overwhelming majority of 98%. The referendum faced a last minute ban by the government who threatened the organizers with prosecution. Even Michel Barnier, the Commissioner for Internal Market and Services, clarified in a written statement back in 2013 that the Commission is not promoting the privatization of water services and attempted to reassure citizens of the fact saying, “the best solution now appears to remove water from the scope of the concessions directive.” And yet the privatization of the water companies in Athens and Thessaloniki goes on as it was originally stipulated in the memoranda signed between the Greek government and the EU Council.

Maybe this is no paradox after all. In an op-ed appearing in the Guardian, Richard Seymour reminded readers that, “the major provisions of the [Lisbon] treaty that mandated these elections were drafted under the influence of the business lobby, the European Roundtable of Industrialists, whose leading lights are currently overseeing the development of a new ‘competitiveness pact’. And where states called referendums on the treaty, they generally only did so where they were confident of getting the result they wanted. And when they didn't, as in Ireland, they simply staged the referendum again, with more economic blackmail, until they won.”

In that sense, it is no surprise that there are hardly any differences between Verhofstadt and the two major candidates (Juncker, Schulz) on corruption and lobbying.

Seymour in the Guardian continues with his own subjective account of the EU presidential debate on corruption:
“What does it mean when Juncker nervously and stiffly insists that, yes, corruption is bad, and we must be careful with lobbying – but we can't prevent interest groups from asserting their interests? Part of the answer, surely, is that Juncker is a seasoned EU manager and knows perfectly well that the system functions in part through the organic connections between business and the state, which are so adequately summed up as lobbying. This can't be corruption, because it is normal.”
“…Yet again, with different emphases, it seemed most candidates agreed with the perspective – just not Juncker's hamfisted way of putting matters. They waxed lyrical about transparency. Allow journalists access, let Transparency International have a look in, set up a register of lobbyists – but don't fundamentally challenge the right of businesses to determine state policy outside of the electoral cycle.”

Jean Claude Juncker, at least as far as we know, may not sit on an investment fund’s board like Verhofstadt, but his conflict of interest is of a much broader scope. As economist Thomas Picketty pointed out in a recent interview with EurActiv, speaking about Juncker, “I find it shocking that one of the groups [the European People's Party – a grouping of mostly conservative parties] chose a representative from Luxembourg, which has become a tax haven. 30 or 40 years ago, the wealth of these countries relied greatly on industrialisation. Today it is built on a financial sector, part of which corresponds to providing tax exemptions to companies from other European countries. This completely goes against economic and social cooperation.” 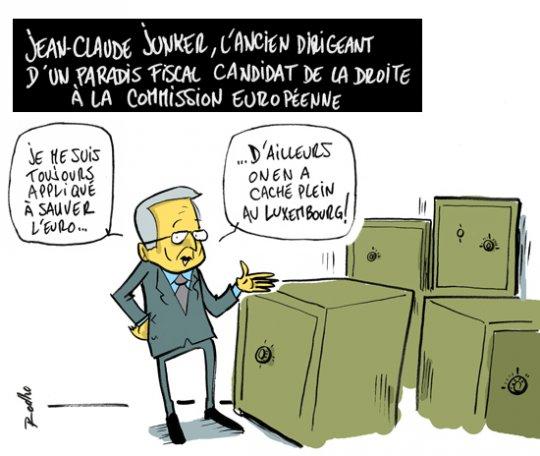 Luxembourg, where Juncker was Prime Minister for 18 consecutive years (1995-2013!), was ranked second in a “World’s Best Tax Havens” list published in 2010 by Forbes magazine, surpassing even Switzerland and the Cayman Islands. (No 1 was the state of Delaware of the USA. Belgium, where the European Commission is based was also on the top 10). Even as recently as February 2014, a report (pdf) by FATF-GAFI, an intergovernmental financial action task force that includes 34 states as well as the EU Commission, referred to Luxembourg’s numerous deficiencies in dealing with both money laundering and the financing of terrorism.

As for Martin Schulz, the German candidate of the Socialists, he is always vocal against corruption – on one condition: that it doesn’t concern German corruption. In February 2014, as President of the European Parliament, he received a question by a Greek MEP regarding EU monitoring of German anti-corruption investigations (since Germany is the only country in the EU which has not ratified the Council of Europe’s Criminal Law Convention on Corruption, nor the United Nation’s Convention against Corruption). Recent reports in Germany and Greece had implicated influential German business leaders in cases of bribery of Greek Defense officials for lucrative arms contracts. Mr. Schulz simply rejected the question as “unacceptable”.