The numbers are as staggering as they are, by now, common knowledge: the debt is at a sky-high 175 per cent of GDP, which is down by a quarter since the crisis started. Meanwhile, unemployment  that is soaring at 28 per cent, wages down to 2003 levels combined with an exhausting series of new taxes, have sent the Greeks' buying power to a free-fall with no end in sight.

How can it be then that Greek imports of expensive mink fur have more than doubled since 2010? 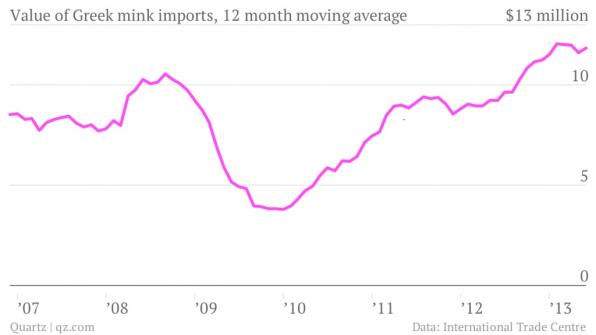 This is the question that Quartz is posing, looking at data from the International Trade Center. In a story on October 17, it points out that the crisis-ridden country was the biggest importer of american mink in September 2012 worldwide, with total imports worth of €105 mil throughout the year.

The explanation turns out quite simple: on the same year, Russia bought €100 mil worth of fur apparel from Greece – 45.1 percent of the latter's total exports of fur garments. Almost all of the rest is bought by consumers in the United Arab Emirates.

Greece is historically one of the major producers worldwide of fur garments with an industry located around the northern city of Kastoria, dating back to the 13th century.