EnglishΕλλάδα
Nikolas Leontopoulos
How corporations hijacked an event dedicated to Grigoris Lambrakis, a politician murdered by right wing thugs in 1963, better known as the hero of ‘Z’, the 1969 Costa Gavras political thriller. And why those dark times for Greece bear a shocking resemblance to today.
An edited version of an iconic photo. In the original (see below in text), Grigoris Lambrakis is seen unfolding his peace banner during the 1963 peace rally from Marathon to Athens. In our edited version, we have replaced ΕΛΛΑΣ (= Greece) and the peace logo with OPAP (the company that is the Grand Sponsor of the marathon) and its logo.
Nikolas Leontopoulos
|

The 32nd 'Authentic Marathon' (previously called Classic Marathon) is taking place in Athens Sunday with a reported record participation of more than 35.000 runner (combined, for the classic route as well as the 5 and 10 kilometers ones), professional and amateur, from around the globe. The event is called the “OPAP Athens Authentic Marathon”. But behind this name lies a story that sheds light in one of the darkest times in Greece, a time that resembles the current situation in the country. As the name implies, it is sponsored by the recently privatized State Lottery Company and Wind Hellas, featured in the ICIJ's Luxembourg Leaks through its previous owner, Weather Investments.

This being the 32nd Athens Marathon,let’s go back to 1983 when it all started. SEGAS, the greek track and field association, launches the “International Race for Grigoris Lambrakis”. It all sounds Greek but actually, Lambrakis is a name familiar to people outside Greece. His story is portrayed in one of the most iconic movies of the late sixties, “Z”, a French film by Costa Gavras starring Yves Montand and Jean Louis Trintignant. Based on a book with the same title, by Greek author Vassilis Vassilikos, the film narrates the true story of Grigoris Lambrakis. Lambrakis was a left leaning politician. In 1963 he was murdered by right wing paramilitary thugs with close ties to the then government in what is one of the most important developments in the greek 20th century politics.


Lambrakis, once a top track and field athlete, was very active in the resistance against the German occupation.  In 1943 he set up the Union of Greek Athletes and organized regular competitions in order to fund public food-banks for the starving population. He completed his medical studies after the war.

While not a communist, Lambrakis had been elected MP with EDA (Union of Democratic Left), the only legal left party in Greece since the Communist Party had been outlawed. Lambrakis’s opponents routinely dismissed him as a dangerous extremist.

In April 1963, he participated in one of the Aldermaston marches in the United Kingdom to protest near the Atomic Weapons Research Establishment (AWRE). On this occasion, Lambrakis, together with some Greek fellow-activists, visited philosopher Bertrand Russell at his house.

On his return to Greece, Lambrakis arranged for the Greek Marathon Peace March that would follow the trace of the marathon. 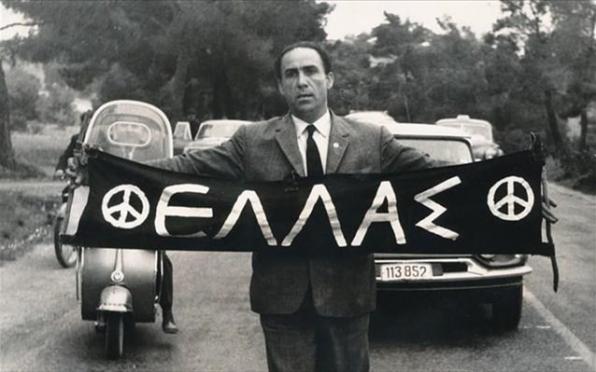 The authorities employ force and intimidation to block thousands of people from reaching the area of Marathon, 42 km north of Athens. Only Lambrakis, making use of his parliamentary immunity, is able to access the starting point. He will unfold his famous banner with the peace logo on it and the word 'ΕΛΛΑΣ' (Greece) and start the Rally alone. Soon after, he will be stopped by the authorities and will remain under custody until the evening. 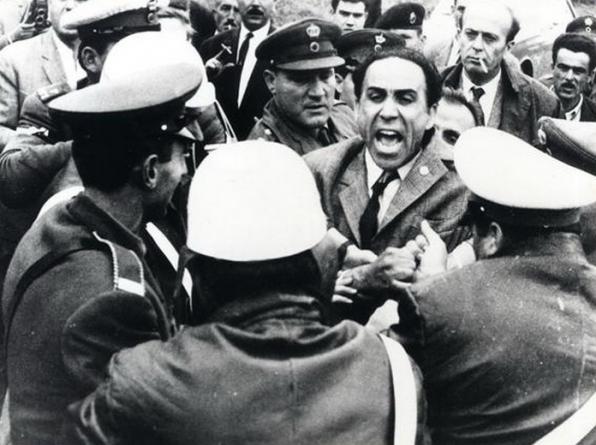 One month later, on May 22 1963, Lambrakis will be murdered by a gang of right wing thugs in the center of Thessaloniki. The government will try to dismiss the murder as a trivial car accident. But the investigation, led by a stubborn judge, Christos Sartzetakis, will unveil the existence of a whole parastate mechanism with close ties to high rank state officials.
Read more in Evi Gotzaridis's essay 'Who will help me to get rid of this man?'.

Half a century after the Peace Rally and the assassination of Grigoris Lambrakis, the political climate in today’s Greece resembles in a frightening way the atmosphere of 1963. A few days before the killing of two Golden Dawn members in early November 2013, Yannis Mavris, one of the top political analysts in Greece, in an interview to ThePressProject referred to “the developments we are witnessing” […] “the element of state repression and the strategy of tension. We are living in conditions of virtual parliamentary democracy. This clearly raises the issue of a new, authoritarian statism, that has analogies to the regime in place before the dictatorship”.

In the past months, Greece has witnessed a new disturbing pattern that revives old demons: MPs are wiretapped, pro-environment activists are brought to justice on charges of forming a criminal organization, the public broadcaster is abruptly shutdown, political assassinations take place, the function of parliamentary democracy is weakened as the government resorts increasingly to the use of decrees that are not ratified by the parliament, strong indications point to the extreme-right having infiltrated the police and the state and far-right militias are conquering the public space, strongly resembling those that murdered Lambrakis. Earlier in 2014, a video of the Prime Minister's chief of staff back-channeling with neo-nazi Golden Dawn's number 2, Ilias Kasidiaris, further conveyed the feeling.

In 1998, the socialist party is in still in power but times have changed both in Greece and abroad. IAAF, the International Athletics Federation, once a purist of amateur sports, has changed too, and succumbs to the temptation of sponsored Grand Prix. The Greek association follows. The adjective «Classic» is added to the Athens Marathon to link the event with the ancient marathon. For the first time, sponsors are allowed.

Three years later the extreme makeover of the event is a done deal. In 2001, the event is linked to a Grand Sponsor, Alpha Bank, at the time the second biggest bank in Greece. In order to make space for Alpha Bank, Lambrakis’s name is withdrawn from the title. For as long as Alpha’s sponsorship is active, the race will be named «Classic Marathon Alpha Bank».

In 2011 it is OPAP, the Greek lottery company, that becomes Grand Sponsor with a contract that lasts until 2016. The race is subsequently renamed to «Athens Classic Marathon OPAP». Under OPAP’s sponsorship Lambrakis vanishes in thin air. In this year’s presentation (in greek) but also in 2012 text in english Lambrakis is nowhere to be found.

Striclty speaking, the OPAP Marathon is still “dedicated to the memory of Grigoris Lambrakis”, although this year the organizers have gone one step further in the deletion of collective memory: Lambrakis is portrayed on the billboards as a 'Balkan champion', which while factually true, is misleading: Lambrakis did not run the marathon in 1963 as an athlete but as a political figure that made a loaded political statement.

But one needs to dive very deep inside the official website in order to spot anything related to Lambrakis. While the greek webpage speaks about Lambrakis, the English one is empty and bears the sign coming soon. So much for the international sponsors, nobody cared about translating a couple of paragraphs on Lambrakis. At least, a simple link to the English Wikipedia page would have sufficed. Or a youtube link to Z. The same applies to the official poster of the race or to the official promotion video.

On the other hand, in the weeks prior to the event, the public is flooded with commercials about sports betting and gambling, mobile telephony, sports shoes, transport companies, private hospitals and other sponsors who pretend they nurture the spirit of the marathon, without of course any reference to Lambrakis himself.

This new era brings change also in the practicalities of the event. There is no doubt that the transformation of the Marathon brought along growth and popularity. Quite a few runners might also add that they enjoy the upgrade in the services offered. But was the price worth it? The race was turned into a corporate event, as opposed to the “Classic” marathon, the first modern Olympics marathon in 1896 or even the revival of the Lambrakis peace walk of 1963.

One of the innovations introduced was the abolition of the principle of free for all participation. A mandatory registration was introduced. Participation in the 2013 Marathon cost from 25 to 90 euros. And if the runner is from abroad, only the 90 euros option applies.

That makes for an interesting paradox: The introduction of sponsors in the first place was supposed to create new income for the marathon so that the cost of it would not have been transferred on the shoulders of the runners. And yet, the registration for the marathon, instead of getting cheaper, went from 0 euros to 25 or 90 euros…