EnglishΚοινωνία
Dimitris BouniasNikolas Leontopoulos
On the 6th December of 2008, 15 year-old Alexandros Grigoropoulos was gunned down in cold blood by a police officer in the center of Athens. The murder proved to be a spark for a wave of often violent protests that rocked Greek cities for days as popular outrage reached a boiling point. Six years later, Nikos Romanos, his best friend who was with Alexandros when he was shot, is on the 26th day of a prison hunger strike.
Dimitris BouniasNikolas Leontopoulos
|

By Nikolas Leontopoulos and Dimitris Bounias

On the evening of the 6th of December 2008 in the Athenian neighborhood of Exarcheia, fifteen year-old Alexandros Grigoropoulos was fatally shot by Epaminondas Korkoneas, a member of the special guard unit of the Greek police. As was eventually proven, the guard raised his gun, pointed it at a group of unarmed teenagers and fired, striking Alexandros in the chest.

Initially the police attempted to give a different account of Alexandros’s murder. Early reports talked of a clash between the police and approximately 30 anarchists. Korkoneas and his colleague Vassilis Saraliotis claimed that they had come under attack and that Korkoneas had fired two warning shots at the air and one at that ground which had ricocheted and struck Grigoropoulos.

Subsequent investigations however proved otherwise. While it was found that the bullet that killed Alexandros had indeed first hit a nearby bollard, this was very close to where Alexandros had been standing. The bullet ricocheted and struck Alexandros directly in the heart killing him almost immediately in front of his horrified friends. In short, Korkoneas aimed at Alexandros, missed, but killed him anyway.

The incident was also captured by an onlooker on a mobile phone camera. A frame by frame analysis of the video was an important piece of evidence used in the trial to refute Korkoneas's version of events. While the video is shaky, the purpose with which the policeman moves and aims his gun before firing is chilling. The disturbing footage is below:

Despite early attempts to play down the incident, social media filled the gap left by the mainstream media’s silence, providing detailed information and evidence about the killing. News of Alexandros’s murder spread around the country like wildfire, triggering a wave of angry protests that same night. The next day saw students occupying junior and high schools – first in Athens and Thessaloniki and subsequently across the entire country. Most universities and technical colleges also remained shut and were the site of student occupations.

On the government’s side, then Interior Minister Prokopis Pavlopoulos offered his resignation but it was refused by Prime Minister of the time, Costas Karamanlis. The Education Minister Evripidis Stilianidis declared the 7th of December a day of mourning.

(Click here to see Boston Globe's round-up of images from the protests.)

The news of Grigoropoulos’s murder triggered an unprecedented wave of protests by students and schoolchildren across the entire country even in remote villages. Students were joined in protests the next day by professors and teachers who declared 24hr strikes.

On the 7th of December the demonstrators were mainly school and university students. While on the evening of Alexandros’s murder there were some cases of rocks being thrown at police stations the vast majority of the demonstrations were peaceful with many symbolic acts of protest such as students lying naked on the steps of police headquarters and offering police officers flowers.

From the evening of the 7th of December older generations began to join the ranks of the protesters. The next day the political left including leftist parties, organisations and student groups called for demonstrators to assemble outside Athens university and in Omonia square. The subsequent march on the 8th passed in front of the parliament in Syntagma Square before ending in the National Gardens.

After the march, unrest broke out with skirmishes between protesters and police and many stores, banks and hotels being damaged. The unrest spread in the evening to many central Athenian neighborhoods as well as areas of Thessaloniki and other Greek towns. The spread of the unrest led to rumours that the government was considering invoking article 48 of the Constitution and declaring a state of emergency but this was denied by the official government spokesperson that night following an emergency cabinet meeting. The President of the Republic was kept in the presidential mansion for his own safety after his private Athens home came under repeated attack.

On Thursday the 9th of December Alexandros’s Grigoropoulos’s funeral was held in a cemetery in the neighborhood of Paleo Faliro on Athens’s south coast and was attended by thousands. After the funeral further violent incidents broke out in the surrounding area with protesters throwing petrol bombs at riot police who responded with tear gas. Numerous shots were also fired in the air by motorcycle police. The clashes continued into the night in many areas of Athens and Thessaloniki as well as in many other towns and cities across Greece including Patras, Larissa, Kozani, Mytilini and Crete.

During the chaos journalists became the victims of violent ‘hooded’ protesters and police brutality as well. Strong reactions were also provoked by footage and photographs of police officers pointing guns at protesters and even firing shots in the air – actions which led to court investigations over the conduct of at least two officers.

Many questions were also raised about the identities of some of the hooded protesters infiltrating protests and causing damages following the publication of various photographs and videos on the internet. In the Ta Nea newspaper on 11/10/2008 photographs were published showing young men in civilian clothes carrying metal clubs and other crude weapons within police ranks in the center of Athens. The related article included the eyewitness account of Theodoros Margaritis, an official of the Synaspismos party (which later evolved to today’s Syriza party), according to which five hooded protesters carrying rocks attempted to join a rally of GSEE (the General Confederation of Greek Workers) but fled when confronted and asked to show their IDs.

The police denied that undercover police were among the protesters engaged in violence at the demonstrations, saying that such actions are forbidden. The force however acknowledged that plainclothes police forces were present at the demonstrations with the aim of facilitating arrests, and ordered an investigation into the identities of the violent protesters. The mayor of Patras also claimed that demonstrations were being infiltrated by individuals belonging to far-right groups, a claim supported by photographs and other evidence.

Riots, protests and sporadic clashes with the police continued for a period of weeks with 20 youths even setting light to the large Christmas tree in Syntagma square on the 20th of December.

Who was Alexandros Grigoropoulos?

Alexandros was born and raised in the neighborhood of Paleo Psychiko. His family was relatively well-off with his mother owning a jewelry store in downtown Athens and his father a bank manager. He liked basketball and football and listened to hip hop and rock music. He often wore a jacket with blue and black stripes and always carried a hair band even though his hair was not particularly long.
He was a well-behaved teenager who avoided violence and clashes with the police. He was not an anarchist according to his friends and family but a kid who was sensitive and grounded. His mother spoke of him as her ‘valuable diamond,’ her Alexi whose brilliance surpassed that of the brightest gem. He lived in a first-floor apartment with his mother, sister and grandmother and had attended the private Moraitis school until a year before his death. The Grigoropoulos parents then decided to transfer their children to the Othisi school in Stamata. Alexandros remained close with two childhood friends from Moraitis school.

One of Grigoropoulos best friends, Nikos Romanos, who was with Alexandros on the night of his murder, broke down immediately on seeing Alexandros’s killer, Epaminondas Korkoneas and was unable to testify in court. Later on, defying the court's order that summoned him, he refused to testify.

On February of 2013 Romanos was arrested for participation in an armed robbery in the town of Velvento, Kozani, allegedly perpetrated by the “Revolutionary Organization of the Conspiracy of Fire,” although he maintains that he was not part of the group and disagrees with some of their positions. Nikos Romanos has stated that he is an anarchist and anti-establishmentarian and that he does not recognize the legality of the proceedings against him.

Following his arrest it is alleged that Romanos suffered beatings at the hands of police. The police deny this although the photographs of Romanos and other arrestees taken while in police custody were visibly doctored in an apparent attempt to conceal the evidence of police brutality. The police claim the photos were doctored to aid identification of the arrestees by potential witnesses and that any injuries had been suffered during the course of the robbers’ arrests.

The 21-year-old is now serving a 15-year prison sentence for his role in  the  robbery. He was transferred to hospital on November 27, 2014 in frail health as he entered a fourth week of a hunger strike to protest against the decision by authorities not to grant him leave to attend college, after he passed college entrance exams while in prison last summer. 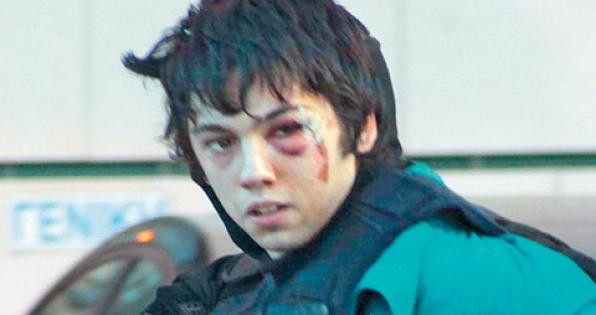 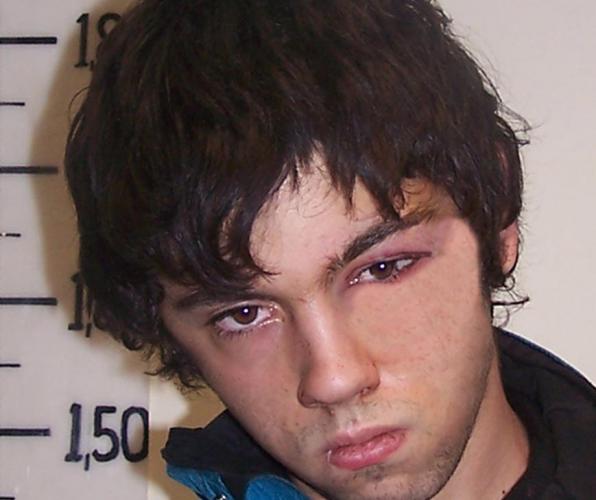 Epaminondas Korkoneas was sentenced to life in prison without the possibility of a subsequent reduction, a finding that has significance as the court upgraded the charge to first-degree murder with intent from murder without explicit intent. The second officer, Vasilis Saraliotis was sentenced to ten-year imprisonment without the possibility of reduction but was released just one year after the ruling.

Watch a report of Alexandros's killing and the aftermath that aired on Australia's ABC 1 here: