English
Λαμπρινή Θωμά
On Saturday, April 4, I traveled from Thessaloniki to Athens by KTEL bus. I have made the trip many times before, but not in the middle of a pandemic as I did now. The differences were not few. 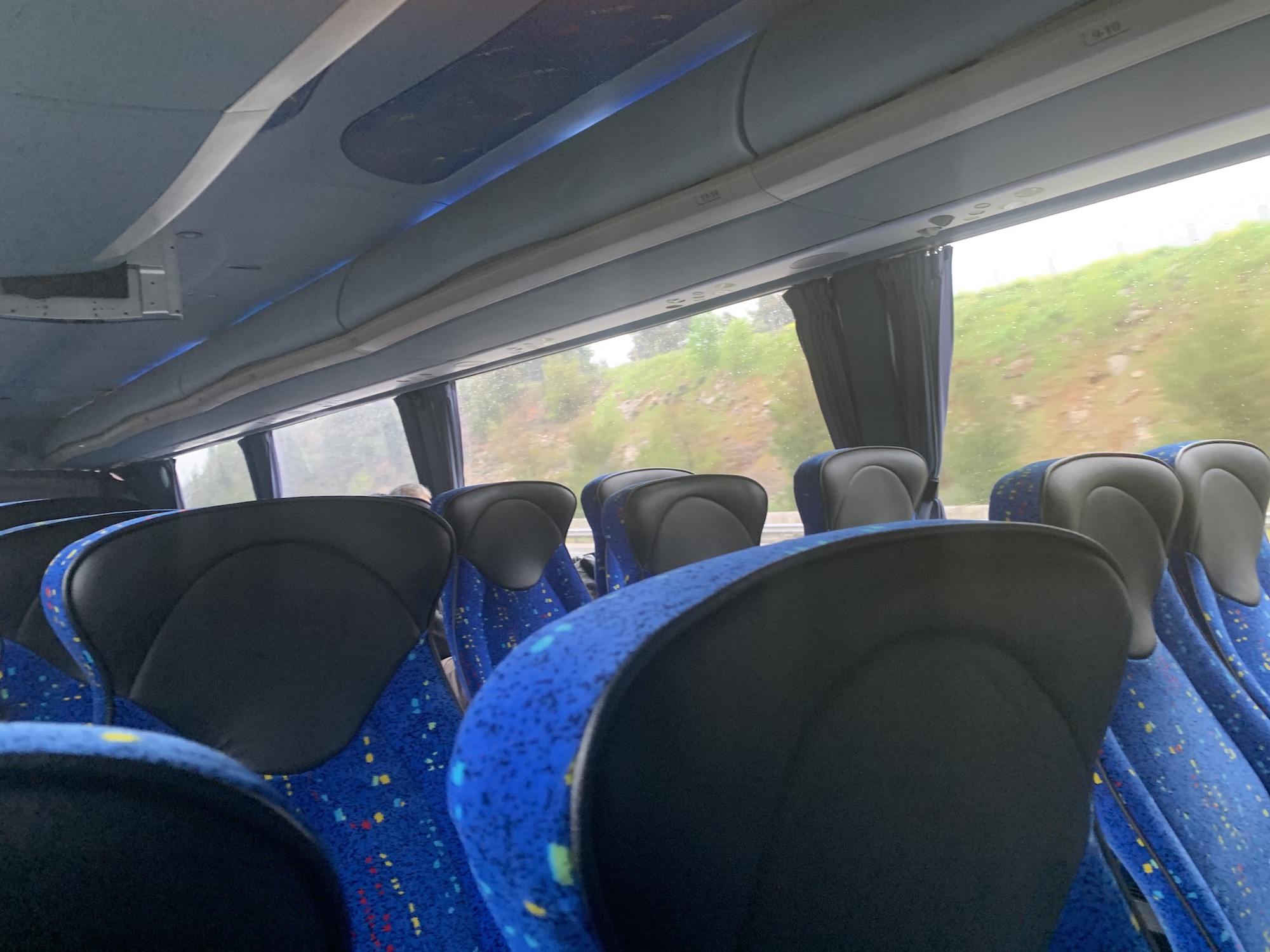 Customarily I preferred to leave before eight in the morning. This is not possible now. Only three busses leave for Athens each day. The same number make the return trip.

Still I have to be at the station before eight, even if the bus leaves at 10 am. The old rules do not apply even on this point. You cannot buy a ticket online. You cannot reserve a seat by phone. You cannot travel with someone and sit next to them—not in theory at least.

And what message do you send on SMS to describe your situation? There are several categories. In my case, the message doesn’t come from me, since journalists operate by special rules in these circumstances. I have saved my address on my phone on a pdf from “taxis.” My companion is Bruno, a lovely dog who is to be adopted by someone in Athens, and my friend Eleftheria, who drives me to the station, has to send a message stating she has received him, as does his new daddy, Panagiotis, when he will pick him up on Athens.

Eleftheria sends a category (2) message. We are thinking that my article of transport on the KTEL is a commodity, as it doesn’t fit any other category. But Maria, another, familiar fellow traveler, corrects us. She will also help me tell Panagiotis what kind of message he needs to send. Category (4) is better: assisted transportation for people with special needs, with the parenthetical note (transport of an accompanying dog). Thus Bruno becomes a necessity, since it’s understood that his owner needs him—there are many reasons why.

I enter the reception room with the service windows. The person responsible for the ticketing has finished cleaning all the surfaces with antiseptic. The room smells clean. I approach to receive my seat. I have a return ticket. I pay half price—that’s the agreement of the Enosi Syntakton, the union of journalists, with KTEL. They don not ask to see the card showing that I legally purchased a half price ticket—it’s a moot point since I arrived before they put the rules in place and someone already checked me. I show Bruno’s papers, which is necessary for the trip. They do not touch them. They do not open them. They trust me that everything is up to date.

I am sitting in the left corner of the reception area of the station. Breakfast is juice and a koulouri. I am reading news on the phone to pass the time. Eleftheria takes Bruno for a walk, to enjoy being outside before she is shut inside the bus for 6 hours. Two young men are sitting together at the other end of the room. Pakistanis, I think. A homeless person, in bad condition, enters a moment later, and is shooed away eventually. No mask, gloves, or decontamination for him. I can smell him across the room. Should I offer him antiseptic wipes? This is all I have to share. What good are they to him? Some populations are expendable—now more than ever.

Our driver lets us put our luggage in the storage compartment. There’s no one else there to assist him, as usual, and he doesn’t want to be needlessly exposed. The ticket collector arrives, and she is asking why we are loading our luggage ourselves, so we explain, and now she is telling the driver that we shouldn’t be doing this ourselves. We show her the tickets and enter the bus. No one asks to see my journalist ID. The less contact the better.

Maria is setting diagonally across from me. This is Maria with two degrees, a future constitutional lawyer and reader of the Press Project. She’s taking time to share antiseptic wipes and gloves with everyone. She’s wearing a cloth mask, which leaves just her beautiful eyes exposed.

So we are all sitting now, one person every other four seats, staggered by rows. The first row is empty, then four women, one each, in the next four rows: second row window right, third row window left, fourth row window right, etc. We move closer to the middle to talk but keep the safety distance.

After we pass the town of  Katerini, whenever I open my eyes, the National Road is completely empty. Not a single car. Just us, just the bus as far as I can see. So I start talking to Maria to ask if any car has passed on her side. Not one, until we reach Larissa and again until we come closer to Athens. No car, no truck. Only one or two busses for as long as we were looking.

Even at the bus stop in Lamia—that weird, dystopia stop—it was just our bus. Three days before the lockdown, when I took the bus up to Thessaloniki, there were four other busses and ours and several truck drivers, the regulars, parked all around. Now we are alone. Ten people, including the driver, going down to Athens. Coffee, cigarettes, rain, and an Australian tourist asking how far it is to Delphi and whether we will pass by there so he can see it. He managed to see the Acropolis during the first leg of his journey, before we were all imprisoned.

The rest of the trip slips by in conversation. TV presenter Konstantinos Bogdanos, who is threatening to sue the Press Project, and other topics of conversation with the young constitutional lawyer keep us occupied until we enter the region of Attica.

There’s a bottle neck after Malakasa, a little before Agios Stephanos, Welcome to the capital city! Bumper to bumper all the way to Kifissia, where Maria disembarks, and then the road opens up to the last stop at the Pedion tou Areos. I point the Australian in the direction of his hotel, then wait for Panagiotis, who comes to pick up Bruno. Without thinking, he reaches out his hand when we meet. I take it. It’s a spontaneous gesture. At another time, I would have hugged and kissed him, I think. I’m so glad to see that a friendly, smiling young man is taking Bruno home; it’s clear that our Bruno will have a family. Now all we can do is smile at one another, since we aren’t wearing masks. To live dangerously has its good points.

The government has radically reduced the number of MPs allowed in plenary sessions, initially without foreseeing online participation for those absent, which came about at a later date. Eventually MPs…

This website uses cookies to improve your experience while you navigate through the website. Out of these, the cookies that are categorized as necessary are stored on your browser as they are essential for the working of basic functionalities of the website. We also use third-party cookies that help us analyze and understand how you use this website. These cookies will be stored in your browser only with your consent. You also have the option to opt-out of these cookies. But opting out of some of these cookies may affect your browsing experience.
Necessary Always Enabled

Performance cookies are used to understand and analyze the key performance indexes of the website which helps in delivering a better user experience for the visitors.

Analytical cookies are used to understand how visitors interact with the website. These cookies help provide information on metrics the number of visitors, bounce rate, traffic source, etc.

Advertisement cookies are used to provide visitors with relevant ads and marketing campaigns. These cookies track visitors across websites and collect information to provide customized ads.

Other uncategorized cookies are those that are being analyzed and have not been classified into a category as yet.

SAVE & ACCEPT
Powered by