English
Konstantinos Poulis
In the end, my family’s house in Varybobi was spared. The fire passed by it twice, at different stages of the blaze, and on both sides of the lot--it burned the garden of the church across the road and it burned the neighboring house. What I mean is that the fire was actually inside the house next door. 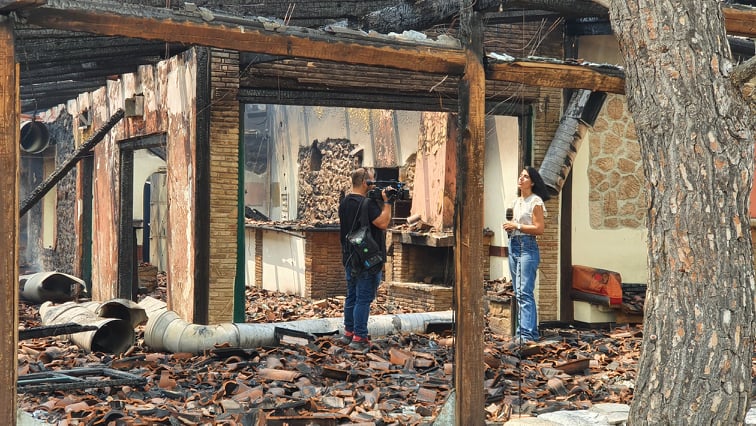 Suetonius tells us that, when someone said to the emperor Nero, “When I’m dead, let the earth be consumed by fire,” Nero responded, “Nay, let it be while I live.” Last night, I left Varybobi at 1.30 AM because the fire’s intensity and ferociousness had become more than I could take. As I left, I grabbed the gift my father had given my mother when they got engaged along with a handful of my teenage writings, still stacked in piles in my childhood bedroom. I left in the belief that I would never see that room again.

In the end, my family’s house in Varybobi was spared. The fire passed by it twice, at different stages of the blaze, and on both sides of the lot–it burned the garden of the church across the road and it burned the neighboring house. What I mean is that the fire was actually inside the house next door.

Although I would, in general, like to minister to a kind of public dialogue that seeks always to maintain bridges with the opposing side and to keep within the boundaries of decency, I think that in this case I can be forgiven a departure:

The time will come when the jackasses who pursue a communications policy atop our embers will have to explain themselves.

These days, as all of Greece burns and our fellow human beings lose their houses, some simple numerical figures have been going around regarding what the Greek Forest Service had requested and what it received.

We all understand very well exactly how these kinds of decisions are made. A friend of mine wrote that Mitsotakis’ statement regarding people’s homes (“homes will be rebuilt”) calls to mind the ease with which someone repairs a broken phone screen. To say nothing of someone who doesn’t repair it at all. Mitsotakis showed the typical lack of anguish that characterizes a person who has never seen his bank account empty.

This brutish indifference to human suffering and deprivation makes it very easy to understand how things get prioritized when it comes to allocating funds.

The fires don’t go on long, and there is always the possibility that they won’t be very widespread. There is, then, no reason to be deprived of money you could put to better use fattening up your buddies.

People have endured living in deprivation and being told it’s their fault because they didn’t ask for a receipt with their sandwich. They’ve endured watching people close to them die of Covid and hearing young people be blamed for their summer love affairs. And now we have to endure the government throwing up its hands and publicly declaring that this was an unstoppable natural occurrence; that any human effort to prevent it would have been doomed from the start.

On several occasions I have volunteered informally (that is, not in any official capacity) to help fight fires. Never before have I seen such an intense police presence at fires. Over these last few days, all these arrogant tough guy-types have been milling around in the hopes of helping us to consolidate the presence of the State in a moment of crisis.

What they have achieved, however, is precisely the opposite: each time we happened to glance at those lazy bums with their bulletproof vests, while the whole place was burning, we realized we were paying the consequences of a political choice that would rather invest in the bulletproof vests that signal the cops’ ubiquitous presence in our lives than in firefighters.

So, these tough guys were scattered like mold in yoghurt, in various parts of the square, and they were scratching their balls–the only thing that a cop at a fire can do.

I looked at them and wondered if they also had the same question as I did: who can shoot them? An officer who was getting into his police car to facilitate the transportation of residents, once the evacuation order had been issued, was still trying to grip his Glock. I found this image absurd. Did the government?

Let’s cross now to the opposite bank. To be called a “hero” in this life is somewhat ambiguous. Obviously, there are people who so far exceed the limits of self sacrifice, selflessness, and courage that it inspires our admiration. But when you hear the government come out on the balcony and applaud a social class, you immediately realize what’s gone wrong. Have you ever done a job without a clear agreement as to payment? So, when the other person starts with the “Thank you so, so much!” and “I’m so grateful!” and “I’ll never forget you,” you realize that money probably won’t be involved.

The accumulation of rage reflected in the controversial and perhaps excessively playful for my tastes slogan “fuck Mitsotakis” is being publicized by the same channels that have undertaken the dirty work of telling us that we’re the only ones who see what, in reality, everyone sees.

I don’t want to let the fact that this slogan implies a punitive perception of sex go unremarked, but I would like to use this as a prompt to recall an obscene Turkish proverb, one of those collected by Thomas Korovinis: “an ass can’t be penetrated by words.”

We should recall that Kyriakos Mitsotakis made the most revealing spoonerism of his career when he said that he was interested in communication, and not in substance. After the poverty caused by the austerity measures, after the deaths that could have been prevented if any measure at all had been taken during the pandemic, the people are now being asked to watch the government’s communications spectacle, whose only concern is to boast of their handling of these fires in comparison with Syriza’s handling of the 2018 fires in Mati.

“Fuck Mitsotakis” is a comedic slogan. I think that members of the government need to appreciate that this kind of whimsy is much gentler than what they deserve.

In the same work Suetonius also mentions that there were nevertheless those who, after Nero’s death, continued to adorn his grave with springtime flowers. Both of these camps will continue to clash, no matter how many journalists they buy off.

Postscript. To those who have been afflicted I send my best wishes, with a pinch of irrational guilt that we managed to escape.