EnglishΕλλάδαΟικονομίαΠολιτική
Χριστίνα Βασιλάκη
While Ireland and Cyprus were praised on their performances in yesterday΄s Eurogroup meeting, the Greek side merely avoided the worst. Significant unresolved issues remain, to be taken up by the lenders΄ representatives on their imminent return to Athens.
Cartoon by Yannis Ioannou.
Χριστίνα Βασιλάκη
| 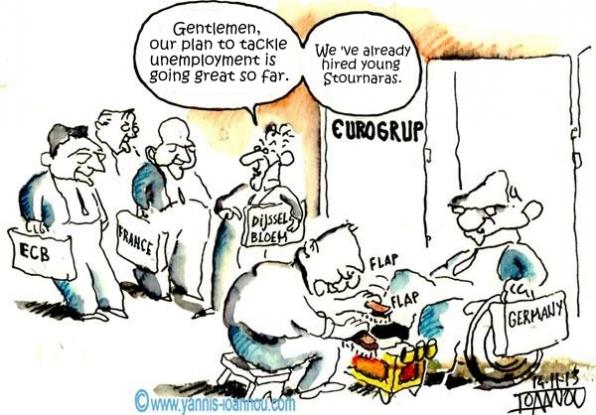 “Greece has made significant progress, but…” That is undoubtedly the take home message for Greece following the latest Eurogroup meeting, with officials describing the need for Greece to proceed with structural reforms as ‘urgent.’

While initially the comments made by Giannis Stournaras, the Greek Finance Minister, as well as his European counterparts were by and large soothing, the strained atmosphere during the final hours of the meeting demonstrated that this was the outcome of a political handling of the situation.

In other words, the Greek government may have convinced its European partners to avoid further souring the atmosphere with more negative comments, yet it was essentially confirmed that significant disagreements remain. Importantly no major headway was made in negotiations regarding the level of the fiscal gap Greece is facing (and consequently the height of additional measures it must implement). The issue has once again been referred back to Greece’s troika of lenders (i.e. the IMF, ECB and European Commission).

Jeroen Dijsselbloem, chairman of the Eurogroup sternly outlined 4 points on which Greece must make progress:
– the milestones agreed at the previous review
– the measures to close the fiscal gap in 2014 and 2015
– structural reforms
– improvement of the governance of the privatisation process

For his part Giannis Stournaras accepted that there were disagreements, yet maintained that this time the Greek government ‘was right.’ He also outlined the proposal he will make to the Troika on Sunday for a series of additional measures to be taken to plug the government’s funding gap:
– Closure of all loopholes relating to payment of social security contributions
– A reduction in expenditures by public utility companies and other public bodies
– Public bodies in health and education will be merged
– Strict imposition of penalties for violations of the newly implemented unified wage system in the public sector.

The measures announced are expected to lead to savings of 1.3 billion euros which equate to 0.7 per cent of GDP. In and of itself this amounts to a tacit admission that the government’s funding gap will be significantly greater than the 500 million deficit it admitted yesterday.

Regardless, however there are other, greater sticking points “There has not been a final agreement because of EAS [Hellenic Defense Systems]” Mr Stournaras said. He argued that, “we do not disagree that there need to be reforms but the company must not be closed. We also cannot allow it to lose its focus on exports. Greece does not border Austria or Switzerland. It necessarily requires a large army and a defense industry.”

The Finance Minister also said that the government would not agree to European demands to lift a partial ban on home foreclosures. He claimed that such a move would cause the housing market to collapse as a flood of cheap homes flooded the market, posing a grave threat to the entire Greek banking system.

Finally, regarding the timeframe for negotiations the Europeans appeared to be more impatient than the Greeks, albeit for political rather than economic reasons, with the head of the Eurogroup saying that Greece urgently needed to demonstrate its ‘commitment to the targets.’ However he expressed doubt that the negotiations would be completed by the end of the year. Mr Stournaras responded more optimistically saying that he hoped the process would be completed in time for the holidays.