English
Κωνσταντίνος Πουλής
We had a fascinating discussion with Olaf Steenfadt, Director of the Journalism Trust Initiative and Bernard Mossiat, Regional Manager in Europe for the JTI, linked to Reporters Without Borders, on “misinformation”, the term they prefer instead of “fake news”, and how to fight back against it. As Olaf pointed out, they would rather avoid the term “fake news” first because it is opaque and second because it is often weaponised against journalists. I mostly find the anti-fake-news crusade overwhelmingly moralistic, in the sense that there is universal condemnation but little understanding of why the phenomenon is still happening. In other words, once we condemn fake news, we need to develop a working hypothesis on why people lie and how to fight back. The JTI approach is very sensitive to the idea of punishing perpetrators, and quite rightly so, in my opinion. 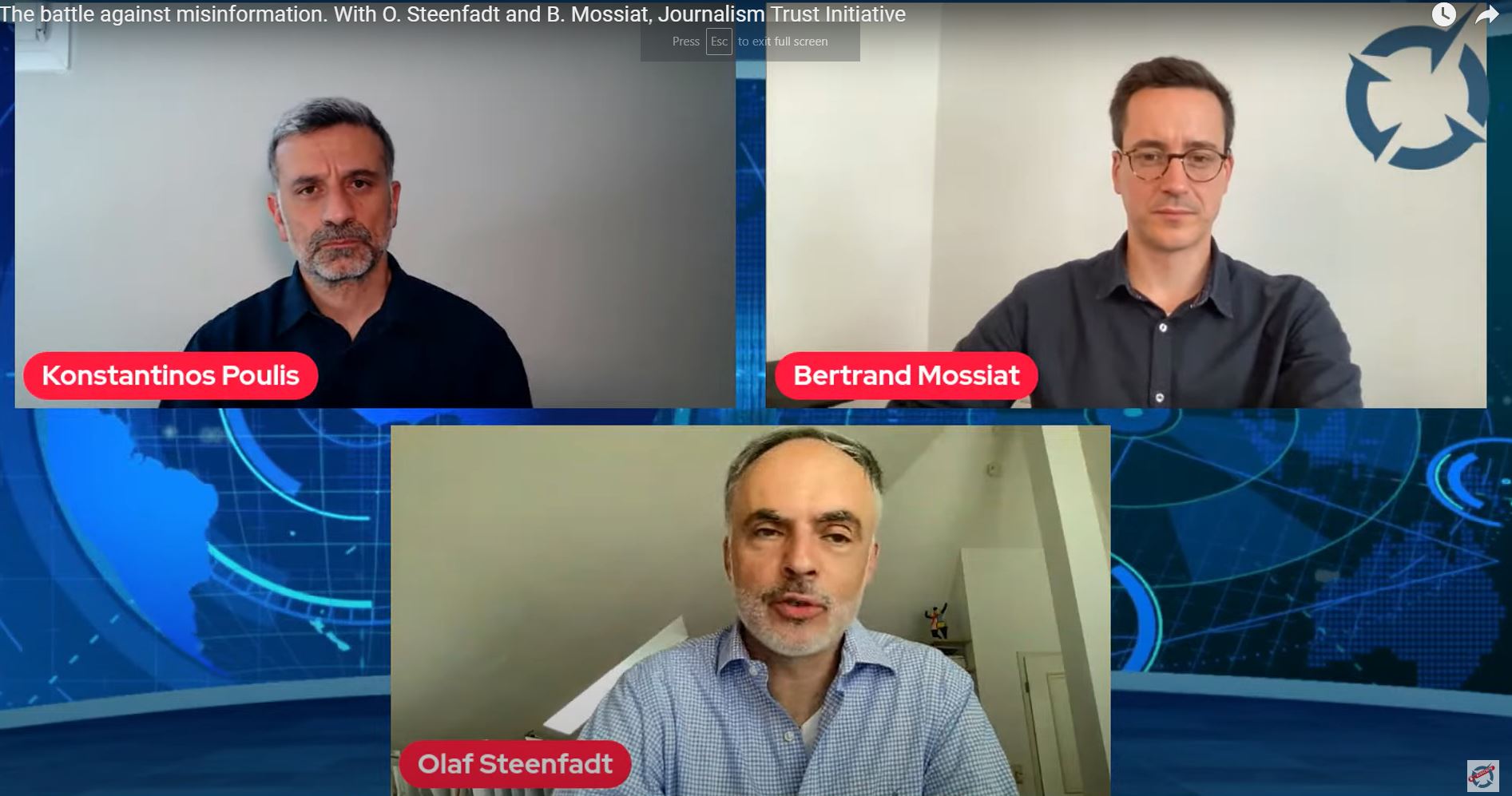 Here in Greece our government has decided to punish dissemination of misinformation with prison time. Even if we assume that any government has only the best of intentions  in doing that, the idea that the state will imprison bad actors in order to encourage good ones bears with it significant dangers of censorship. Hence, the Reporters Without Borders, which is linked to the initiative (JTI is operated by the RSF – its supporting partners include the EBU and AFP), has issued a statement on the Greek law that punishes the dissemination of fake news with prison time. The answer, says JTI, is to encourage those who practice good journalism, rather than punish those who spread false news.

So, how do we decide on the criteria as to who is producing good quality journalism? Given that it is obviously impossible to monitor the content at such an enormously large scale, the criteria should focus on, among other things, transparency. That is, this is an approach that replaces moralistic wishful thinking with a systemic understanding of the roots of the problem. In other words, the old “follow the money” principle.

We also talked about humility and impartiality, both of which are conspicuously absent from the public arena. It was important for me to clarify the meaning of impartiality, as I cannot imagine political debates without political views, but still there much to be said about all the possible ways in which we can uphold our values and views and still respect our code of journalistic conduct.

When the discussion turned to critical examples of misinformation from the past years, the most obvious was the case of anti-vaxxers. It might be of some interest that in Greece, conspiracy theorists have been promoted (!) and even given prime time television coverage by mainstream media, in order to suggest that Greek society resists the implementation of safety measures against the pandemic, even when there was only a handful of people e.g. questioning the efficacy or safety of masks. Contrary to what one might expect, it was not only social media that promoted these pseudo-scientific claims. It was mainstream journalism, too. Why? Given the economic ties that link the mainstream media to the government, it should not escape us that this was a very convenient narrative of what went wrong and who is to blame.  In other words, it is an example of “fake news” weaponised against any criticism targeting the government. When we want to argue that there is ample scientific research suggesting that death rates escalated because of limited access to ICUs, mainstream media prefer to fight an easy fight against conspiracy theorists rather than address what seems to be severe mishandling on the part of the government.

All in all, this is an example of an issue where fighting the good fight against misinformation takes much more than proving conspiracy theorists wrong.

This is why the conversation with the two journalists from the JTi was eye opening and fascinating. We all speak in the name of the truth. The question is how to decide what produces misinformation in terms of structures and institutions. In that respect, this was a very useful conversation.