English
The Press Project
In the past, the people we’ve named Person of the Year have been newsmakers in Greece. Assange’s case marks an exception, which we’ll try to explain. But for us to explain, we need to talk a bit about the founder of ThePressProject, Costas Efimeros, and the role that Assange played in making us what we are today. 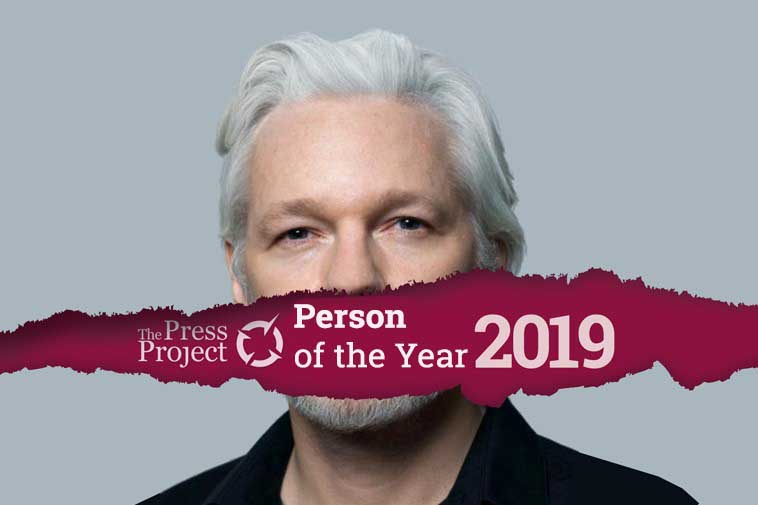 Efimeros was very proud of his collaboration with Wikileaks. When he used to talk to students about journalism, he would say that all he wanted was for them to look up and learn about Assange.

It’s now been a century or so since the two sides of journalism—the two philosophies a journalist might choose from—were fully articulated.

The first is that journalism is a bridge between the ruling class and the ‘naïve’ citizens, the common people who need to be fed a version of the elite’s message that has been pre-chewed to make it go down more easily. The second position is that journalism is necessary for shining a light on what’s happening behind the scenes—for revealing corruption and criminality and checking power in the interest of the people.

Amid all the pointless debate about whether Assange really is a journalist, there is one undeniable fact: Assange is a man who, for years, has endured the punishment of being deprived of his freedom and who has been the victim of libel and blatant abuse precisely because he publicizes documents that expose powerful actors who see that he pays for his actions. He does not merely participate in the normal workings of journalism; he offers an exemplar and value system for all journalism worthy of the name.

The fact that the initial sexual allegations have been replaced with the current charges gets to the heart of the case and is telling of its true dimensions. When the main indictment was filed, the true motives for Assange’s multi-year persecution were brought to light. His case testifies to the courage it takes to reveal the truth and the price that some people are willing to pay for it.

At this moment Assange is in danger. We may reach a point of no return, where the game will already have been lost, and anyone who in the future is minded to stand up to the powerful will know that they will first have to face smear campaigns and then defeat. That’s why we need to talk about Assange right now.

We have to speak up about what’s happening as loudly and clearly as we can; we have to speak about the attempts out there to terrorize investigative journalism.

It is for these reasons, at a moment when not only the outcome of his case but indeed his very fate is set to be decided, we have decided to name Julian Assange ThePressProject’s Person of the Year. Because, at a time when everyone stands in fear, not only for their lives and freedom but for their jobs or even just their next promotion, Assange reminds us what it means not to be afraid, and to be willing to make sacrifices rather than deals for this profession.

Here at the TPP, beyond our journalistic collaboration with Wikileaks, we’ve published interviews with Assange himself and with his father; we’ve devoted an episode of Anaskopisi to his story; we’ve published exclusive reporting on his condition and we have continuously covered developments in his case.