English
Θάνος Καμήλαλης
The address of the President of Ukraine, Volodimir Zelensky, was expected to be a government fiesta, an attempt for the rhetoric of Mitsotakis' government to counterattack regarding the extremely dangerous and almost exclusively personal choices in the country's foreign policy. This fiesta was ultimately transformed, after the message of a soldier belonging to the neonazi Azov battallion of the government of Ukraine, into an unexpected Waterloo, of historic and multiple dimensions. This Waterloo belongs solely to them. We are the ones who felt ashamed 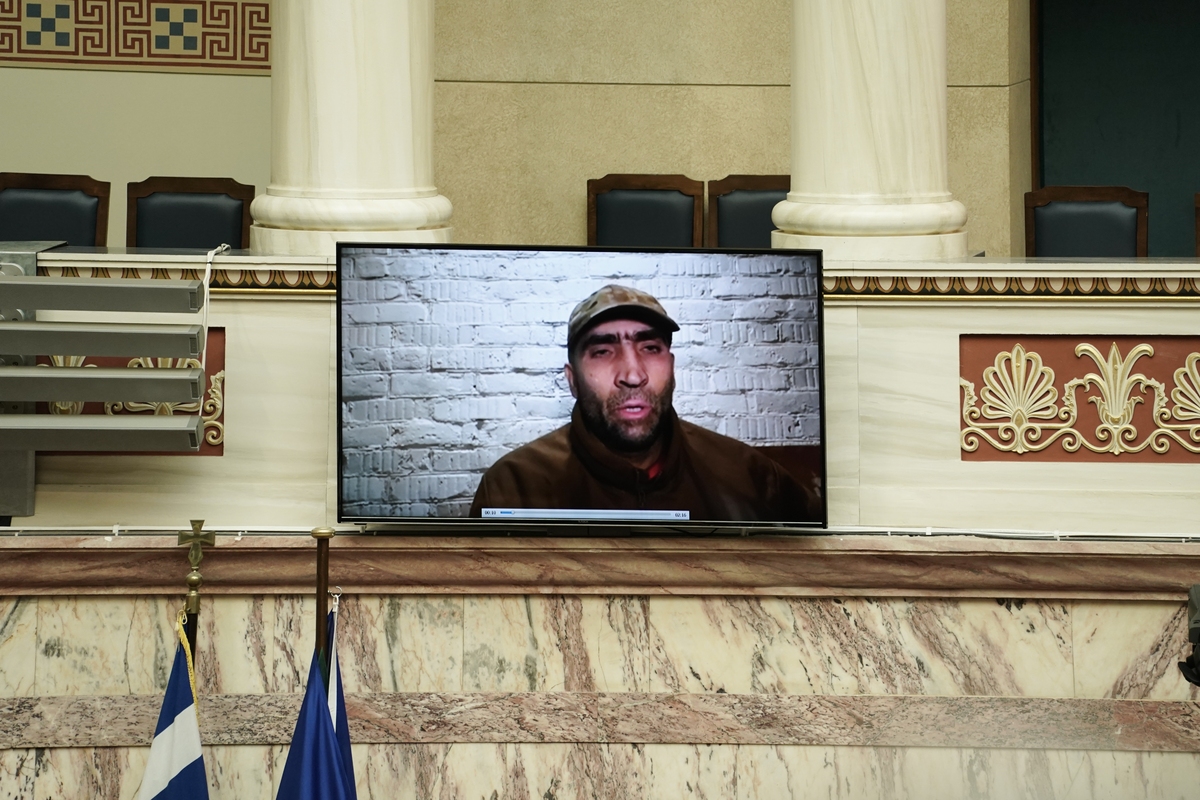 For the most optimistic members of the government, everything was ready. According to the plan, Zelensky would address the Parliament, would move us with his words, would refer to the history of Greece (as he does correspondingly in each and every one of his addresses to a foreign parliament) and would ask for even more support. The next day would find us with hundreds of articles glorifying his appearance, a few articles glorifying Mitsotakis’ policies (without a reason) and the return of the “either with us or against us” dilemma.

The less optimistic friends of the government would simply expect that the fiesta would be accompanied by the footnote of an absence of any kind of reference to Cyprus by Zelensky. This absence was a given because of the role Turkey has undertaken in the midst of this military conflict. After all, Erdoğan is “isolated” only according to Kyriakos Mitsotakis’ analyses and the myths circulated by the pro-government media. It should be noted that the President of Ukraine did not make a single reference to Turkey’s invasion of Cyprus, not even in his address to the Parliament of Cyprus, on Thursday afternoon.

What happened, however, no one could have imagined. Either from the Left, or from the Right. The term Waterloo is appropriate, not only because of the scale of the public backlash, but also because of what happens when megalomania, in this case the Prime Minister’s, meets a “wall”.

Suddenly, instead of the President of Ukraine, who on the one hand is “controversial” and possesses a record of numerous undemocratic decisions, but on the other hand is the leader of a country under invasion, a soldier of the neonazi Azov battalion was addressing the Greek Parliament. The meeting was concluded, the President of the Parliament shouted “long live Ukraine”, the MPs of New Democracy and KINAL were applauding enthusiastically, SYRIZA (with numerous absent MPs) was numb, the single MeRA25 MP had departed, and the Communist Party (KKE), absent and proven justified, was already talking about a day when “even shame itself felt ashamed”.

Less than an hour later, while the parties of SYRIZA, MeRA25 and KKE were releasing outraged statements, Kyriakos Mitsotakis was releasing yet another message expressing how moved he was from what we heard in the Parliament. The President of Greece, Katerina Sakellaropoulou, did the same. Someone who was delayed in hearing these messages was certainly Antonis Samaras, who told parliamentary reporters that the appearance of the Azov fighter was a “big mistake”. Thus, the first comment from a New Democracy MP regarding Zelensky’s appearance came from the former Prime Minister, with a particularly critical tone.

Social media slowly started to boil, as we gradually realized what had happened, whether we had indeed heard, whether we had indeed witnessed this humiliating spectacle. And before the government’s apologists could go to work, aiming to inform us that “the Azov battalion is not what we think”, the government’s spokesman, Giannis Oikonomou stated that “including the message of a member of the Azov battalion in the address was erroneous and unsuitable”. He proceeded to attack the opposition and to, once again, raise the “either with us or against us” dilemma, considering it a good idea on such an occasion.

The government hasn’t explained, however, why the message of a member of the Azov battalion in the Greek Parliament is “erroneous and unsuitable”. We are going to be left wondering. Are they actors and not soldiers? Are they agents of Putin’s regime? Are they neonazis? Up until today, though, there was an ongoing, systematic effort to downplay the fact that the battalion in question is officially a part of the Ukrainian military since 2014. Zelensky’s Jewish heritage and the low election rates of Ukraine’s neonazi parties were mentioned despite the fact that prestigious western media outlets have published extensive presentations in the last eight years.

Giannis Oikonomou, however, did not tell us why. Which begs the next question: Ultimately, do we not “like” them enough to have them appear in the Greek Parliament, but we like them enough to send them kalashnikovs?

Another, rhetorical, question: Journalist Thomas Sideris was forced to resign from national radio’s Proto Programma, alleged he was subjected to psychological violence and was left unprotected against the threats and insults of public commentators, after broadcasting a radio documentary on the Azov battalion. Is he not proven justified today?

Furthermore, no one has yet explained how that video message came to be shown in the “Temple of Democracy”. The President of the Parliament, Kostas Tasoulas, the primary bearer of this important responsibility, failed to condemn and admit his “error”, which the government admitted. He mumbled something about the “big picture”, he doesn’t want to make an official announcement and he counts how many minutes earlier the video was provided, to say that there was no time to examine it. Someone should inform him that, unfortunately, he possesses the third highest civil office of the Hellenic Republic.

“I didn’t hear, I didn’t know, I didn’t see” is obviously not a serious response, and it does not honour the government or the Parliament, because it connotes subservience and outside pressure. Even if the government has not comprehended this humiliation, or it leaves them coldly indifferent, it was fortunately felt by a lot of people today.

The fact that for seven years we had neonazis in the Parliament does not negate the fact that we never got used to them, and neither do we want imported ones, nor will everything be hidden behind the Russian invasion and the drama of war, the suffering of the Ukrainian people. It is positive, however, that those deluding themselves with the “right side of history”, choosing one of the two sides and essentially asking for escalation, now know a little better what this side includes, as we all know the opposing one much better.

Another question that occurs, is the question that must always be asked in this war in Ukraine. What will benefit the Ukrainian people and what won’t. The country becoming the new Syria and the new Afghanistan, with an endless conflict, won’t. A Russian occupation, that will lead to more crimes, won’t. Does bringing a member of a neonazi battallion as a representative benefit the Ukrainian people? I think not. To the contrary, what is more likely to happen is that it will equate the Ukrainian people to the neonazi groups that are active in the country. Solidarity with Ukraine is undermined in a way that would make the Russian regime rub their hands. It should be noted that among Putin’s pompous pretexts for the initial justification of the invasion is the “denazification” of Ukraine.

And if the argument here is that this just happened to be the “Greek-Ukrainian Michail”, we should consider that before the invasion, there were approximately 100,000 Greeks in Ukraine, a significant number of which resided in martyred Mariupol. Zelensky made a specific political choice here, and Mitsotakis’ government accepted it, shrugging their shoulders.

The consequences are that firstly, the government faces significant public backlash, essentially interacting only with its “allies”. Secondly, on the 7th of April 2022 a humiliating, dark page was written in the history of the Hellenic Parliament. The fact that it has happened again, that this devastation of Mitsotakis’ government might seem endless, must never mean that we get used to it.