English
Just a few weeks ago, when students occupied schools to protest the anticipated arrival of refugees, we asked ourselves: what makes young people stand in opposition to their hapless, persecuted peers? 82 unaccompanied minors are now being held in Amygdaleza under unacceptable conditions that go against international standards and all human reason. Then, just yesterday morning, an Amnesty International event at Amygdaleza brought us joy. Middle and high school students actually entered into conversation with refugee children and gained a lot. Meeting with them directly, they communicated in a code that was human and shared—meaning that it brought them together rather than kept them apart.
Konstantinos Poulis, Nantia Roumbou 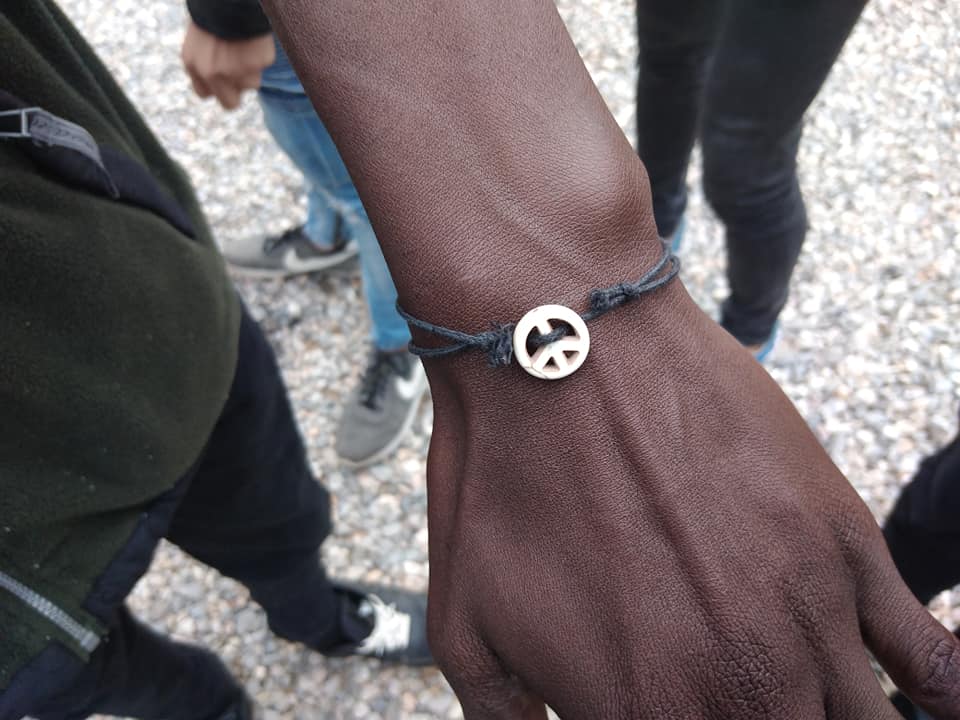 Translated from the Greek original , published in ThePressProject, December 2011

The occasion was the universal Human Rights Day. Amnesty International, collaborating with several schools that have adopted the Amnesty International educational program “Me and You Together: Education in Human Rights,” organized a solidarity event with unaccompanied minors who are refugees and immigrants detained at the center in Amygdaleza. Activists of Amnesty International together with students, parents, and teachers from the 1st Public Gymnasio (Junior High School) of Iliou, the 5th Public Gymnasio of Nea Ionia, the 2nd Lykeio (General High School) of Nea Ionia, and the 3rd Sivitanidios Public School of Trades & Vocations all visited the Predeparture Alien Detention Center (PROKEKA) in Amygdaleza. They talked with their refugee and immigrant peers and gave them letters of solidarity, handicrafts, and friendship bracelets which they made with their own hands in school. “We wish to give them hope with our letters. The bracelets are tokens of friendship,” explained Vagia, an 8th-grade student.

“It’s important for students to be sensitized so that they can take away their experiences and share them to others,” said Mrs. Komtzidou, principle of the 5th Gymnasio of Nea Ionia. “37 students took part in the program. Many of them volunteered. Of course they had to receive their parents’ permission to take part in the event. Not every parent agreed. We held a meeting to soften the opposition, so to speak, and I think most of them were persuaded. 10 students initially volunteered for the event and another 8 followed.

According to the data from the National Center for Social Solidarity (EKKA), there are over 5,000 unaccompanied minors in Greece, of whom 1,184 live in “inadequate and unsafe housing”, exposed to various risks. Similarly, 1,746 children live in camps on the islands, while 257 children live under circumstances in which they are stripped of their freedom and they are held in “protective” custody.  In Amygdaleza in particular, 82 children are held today.

We talked next to barbed wire with a teacher from the 3rd Sivitanidios Public School of Trades & Vocations, who told us about the inability to really provide the unaccompanied minors with what they need: “At our school we have two classes for refugee children. What I have come to understand from all that we’ve been through is how I do not know if our presence gave something to these children, and I say this in the sense that we cannot give them what they are really missing: their lives. Their lives are what they have lost. These children may be breathing but they are not living. How can we give them this? They are 15 to 18 years old, and, like our kids who go to school, they want to do the things that all kids do, but they do not.”

“They are literally alone, and in essence, all they ask for is for their lives”

Lucas, a student at the 3rd Sivitanidios Public School of Trades & Vocations, is originally from Egypt; as such he already had a common code: he speaks with the refugees in Arabic.

“I spoke with two kids who are from Egypt because I am also from there. I am Egyptian, I was born there and I came here at an early age, so the students and I spoke Arabic. They told me that they have been here a week now and have nobody: no parents, no siblings, no one. They told me that they do not care where they go or where they will be transported, all they want is to have a decent place to live and to be treated like ‘humans,’ they ask for nothing more. They told me they don’t have the appropriate resources in there and the conditions are not optimal for survival. They pass time on a cellphone, talking to their relatives, to their friends. They can’t get through the day otherwise.”

“The situation is tragic. I thought to myself about how sometimes we say, ‘I can’t,’ or, ‘it’s not possible,’ to various things, and make excuses, but then we see these kids who are here and have no one, no parents. They are literally alone, and in essence, all they ask for is for their lives,” says Lucas. “Situations like these make you appreciate what you have,” concludes Spyros, another student.

Of the four total students who visited the organization, the second to speak translated and explained a conversation he had with a minor: He said he asked him how he sees his future, and the young refugee replied that he wanted to become a lawyer, and that he doesn’t want to have to worry about finding a doctor, or being able to afford food, and he doesn’t want to be scared.

They have exchanged contact information in order to find time to talk again in the future. We think that this here, this is a transformative experience. It is not only a source of comfort to the detained child refugees, it is an educational experience for our own students, who needed to be informed and most importantly project their voices.

When we asked her about the schools that have mobilized against refugees and immigrants in their area, as they have in Giannitsa, Dora, an eighth grade student at the 5th Gymnasio of Nea Ionia, commented that it is very unjust; yet she also emphasized  that “the mindset that parents have at home” plays a part, “since, for a child, it doesn’t matter whether someone is a refugee or a Greek […]”

The event we observed obviously required parents’ permission, so we understand that there had to be a conversation, a briefing, which wouldn’t be untroubled, since all of the stereotypes about immigrants that flood our public discourse would inevitably intrude. What we observed in Amygdaleza, however, is what happens when these stereotypes don’t have the last word, but rather when people themselves have the last word—people who get together opposite or next to each other and talk.

Teachers involved in the event also presented the same picture. Mr. Margetis, a teacher at 5th Gymnasio of Nea Ionia, also referred to the process of communication with the parents—they needed a briefing that not only respects but also calms their fears: “We have given the freedom, to those who disagree or have different opinions, to not participate in the specific event.The truth is that not all of the kids at our school participated. The rest of the parents were a little bit hesitant as to whether they should participate or not. We had a general conversation with the parents, and invited them to a seminar for Amnesty International’s program. […] Essentially, there was hesitation in terms of how we would approach and present the topic to the kids, that is to say, the extent to which we would present our country as a welcoming place that accepts everyone whether or not they have documents […] Because no matter how much they read our informational pamphlet, it was not clear to them how we were going to participate in this. When we talked, we essentially gave them some answers—there were objections, disagreements that “we don’t want any contact with refugees to occur.” Also, when we said we wanted to visit the Juvenile Detention Center for unaccompanied minors, the scenes of overcrowded facilities  in Moria and elsewhere came to their minds, and we explained that safe zones where kids are held exist.”

But What Is Really Happening with the Underaged Children Who are Being Held in Amygdaleza?

The director of Amnesty International, Gabriel Sakellaridis, explained to ThePressProject that the 82 unaccompanied minors at the center of it all find themselves “parked” due to the lack of facilities, although they have not committed any offense except that they are under 18 years of age. “In reality, this is nothing more than detainment, actual detainment, for people whose only crime is that they are under 18 years old.  These kids that are being held have no reason to be in state detention, state prison.  The strangest thing is that they themselves don’t understand this. They believe that they are being held because they entered this country illegally and that this is the only problem.  The fact that these kids are stuck here because there is no room in the facilities for unaccompanied minors shows how the political response in Greece and in Europe more broadly has failed with regard to unaccompanied minors.”

2019 was a tragic year for unaccompanied minors in our country.  In August, a 15 year old kid from Afghanistan was killed while in the “safe zone” of Moria. In September, a five year old child was hit and killed by a truck while playing with a cardboard box outside of the same camp, while just a few weeks ago, a 9 month old died of dehydration, again in Moria.

As Amnesty International reports, if there is one lesson that we have to take away from these tragic events, it is of coure this: refugee and immigrant children should be given special protection and care: they should not be subject to the torture of staying in unbearable camps or, even worse, being detained under miserable conditions and absolutely not for long periods of time.

This action was taken at one point where parents, educators, and activists came together, with children on either side of barbed wire fencing. The action’s success, however, depends on the ability of all the key players to cooperate, so that the children can experience human interaction. These interactions will educate them a small but essential goal: offering our solidarity to the unaccompanied minors who ask for dignity and a future, instead of hostility and mistrust.